Home About COPE Our organisation 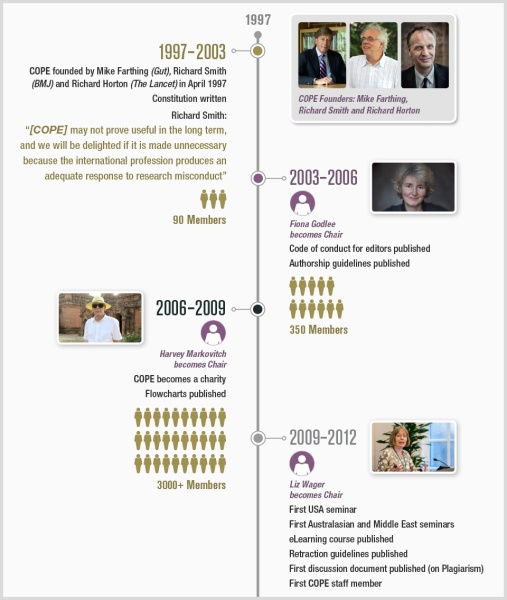 In April 1997, the first COPE meeting took place, a relatively informal gathering of a group of concerned editors, prompted by Mike Farthing, who in his first year as editor of Gut encountered four cases of misconduct and wondered whether this was unusual. Initial exploratory meetings and discussions of anonymised cases were attended by editors of a number of journals, including the BMJ, The Lancet, British Journal of Anaesthesia, Journal of Bone and Joint Surgery, Annals of Rheumatic Diseases and Journal of Clinical Pathology, and the first open meeting was held in November 1997. Richard Smith (editor of the BMJ) wrote

“[COPE] may not prove useful in the long term, and we will be delighted if it is made unnecessary because the international profession produces an adequate response to research misconduct”.

By 2000, COPE had over 90 members, a constitution was drafted, and Mike Farthing was elected Chair.

Fiona Godlee became Chair of COPE in 2004. The Code of Conduct for Editors was launched and published on COPE’s website (more about the history and context of the COPE guidelines). The Code of Conduct for Editors set out the minimum standards to which editors should strive to adhere and COPE members were expected to abide by it. Guidance on How to Handle Authorship Disputes was published. COPE’s membership rose to almost 350 and the first member survey was carried out.

The COPE flowcharts, guiding editors through the steps of due process in dealing with suspected misconduct, were published in 2006. Harvey Marcovitch took over as Chair of COPE and oversaw COPE being granted charity status in February 2008. International reach continued apace with members from all over the world. With several large publishers joining, membership reached over 3000.

Recognising the need for full-time staff created by the growth of the organisation, COPE appointed an Operations Manager. Liz Wager took over from Harvey Marcovitch as Chair of COPE in 2009. The Code of Conduct was revised and updated to include Best Practice Guidelines, an extension of the Code as a gold standard to which to aspire. A Code of Conduct for Publishers was also produced. A quarterly newsletter, Ethical Editing, was begun in 2009. Guidance published included the COPE Retraction Guidelines, the first discussion document (on Plagiarism), and an online eLearning course. COPE’s international reach continued with the first North American Seminar, and seminars in Australasian and the Middle East.

2012 to 2016 - growing membership, and seminars in South America and Europe

The new Chair, Virginia Barbour, accepted the meritorious award from the Council of Science Editors on behalf of COPE. The COPE website underwent a redesign and the quarterly newsletter was replaced with the monthly COPE Digest. More guidance documents were published: Guidelines on Cooperation Between Research Institutions and Journals; Ethical Guidelines for Peer Reviewers; Principles of Transparency for Scholarly Publishing (1st version); and discussion documents on Authorship, and Sharing of Information among Editors-in-Chief. The Code of Conduct and Best Practice Guidelines for Journal Editors was reviewed and COPE produced its first formal strategic plan. With growing membership numbers, COPE conducted a major member survey, one of the outcomes being the start of the university membership pilot scheme. The growth in size of COPE was reflected in the employment of more staff, and the growth in breadth was evident in COPE’s first South American seminar and its first European seminar held outside London, in Brussels, Belgium in 2014.

Chris Graf and Geri Pearson, the first Co-Chairs of COPE, led the China strategy, leading to COPE’s first China seminar in Beijing in 2017. COPE’s international reach continued with involvement in the World Conference on Research Integrity in 2017 as part of the programme committee. Spanish and Chinese translations of key COPE guidance documents were started. In 2017, the Code of Conduct and Best Practice Guidelines for Journal Editors was retired and replaced with the Core Practices. The COPE Journal Audit was reviewed and updated in line with COPE’s Core practices, and the third version of the Principles of Transparency and Best Practice in Scholarly Publishing was published. COPE's Complaints subcommittee was replaced by a new subcommittee, the Facilitation and Integrity subcommittee, with a clearer remit and process. COPE materials were redesigned, and a clear brand style developed, with the introduction of infographics alongside the COPE flowcharts. Continuing COPE’s involvement with universities, a workshop was held with the UK’s Russell Group Integrity Forum in 2018. COPE’s sustained growth saw an expansion in the number of Council Members and COPE staff. To celebrate COPE's 20th anniversary, a special European seminar was held in London, with current and former Council Members in attendance.

COPE Chair, Deborah Poff, oversaw the development of the strategic plan for 2020–2023, one of the objectives being universities accepted as members. The new strategy was based on an environmental scan and the results of member research conducted by an independent market research consultancy. COPE’s reach and diversity was reflected in a prominent role at the World Conference on Research Integrity in Hong Kong in 2019,  and the primary research COPE commissioned to better understand the publication ethics landscape in the arts, humanities, and social sciences. The refreshed and updated COPE website was launched, with DOIs assigned to all key COPE resources. Guidance on Predatory Publishing was provided in a discussion document and the COPE cases database had more than 600 cases. Membership continued to increase, with the number of members exceeding 12,500 from 103 countries.

Dan Kulp became Chair of COPE in 2021. The inclusivity, diversity, equity and accessibility subcommittee is established, and the books working group begin to develop new resources to support book editors and publishers. More guidance was published: guidelines on the Editing of peer reviews, Editorial board participation, and a new flowchart offering editors a step by step guide on how to handle the process when a critique, or commentary, is received after publication. Following Forum discussions with members, COPE developed discussion documents on Diversity and inclusivity, and Artificial intelligence (AI) in decision making.