All peer review processes must be transparently described and well managed. Journals should provide training for editors and reviewers and have policies on diverse aspects of peer review, especially with respect to adoption of appropriate models of review and processes for handling conflicts of interest, appeals and disputes that may arise in peer review

Case Discussion: Editor and reviewers requiring authors to cite their own work

In this case, a staff member at a journal noted that a handling editor and her or his favorite reviewers frequently requested authors to cite the editor’s  and reviewers’ work in revised submissions. Once this was confirmed, the editor-in-chief consulted the editorial board who agreed that the requested citations were not scientifically necessary.

All members are welcome to join this Forum which will be held by webinar. It follows the usual format where members' cases are presented for discussion and advice from all those participating in the Forum. The Forum Discussion is "Diversity and inclusion in research publishing".

In 2016, group A published manuscript X in our journal. In early 2017, group B submitted a comment critical of the published manuscript. Following peer review, in accordance with the journal’s then active policy, the comment was rejected from further consideration. The policy allowed for the author of the original article to be one of the peer reviewers of the comment.

The lead author of group A, acting as one of the three referees for the comment, indicated in their confidential comments to the editor that group A would be submitting a correction to address issues arising from the comment. Group A duly submitted and published a correction to manuscript X. Soon after, the journal was contacted by a legal representative of group B to express their concern over the publication of the correction by group A. The representative indicated a concern that the unpublished comment submitted to the journal contributed in part to the submission and publication of the correction. Group B researchers considered that the submission of their comment under the journal’s then active comment/reply policy had allowed the authors of the correction to prepare their manuscript using material that they had been privy to only via their involvement in the peer review of the comment, and that this fact had not been acknowledged in the correction.

Group B requested the journal withdraw the correction and re-open the peer review of the comment. As the journal’s management team considered that the first request would leave an error in the scientific record uncorrected and the second request was unlikely to result in a change of outcome, the journal instead investigated the matter raised by the representative Group B, with the goal of preparing a new correction for publication to take into account the facts of the matter following the investigation.

The investigation identified an error on the part of the administrative team that contributed to this situation; namely, failing to ensure the authors of the correction provided due acknowledgement of the provenance of the correction. As part of the investigation, the journal contacted group A for their input. The authors agreed they should have included an acknowledgement, but not having seen similar acknowledgements on other corrections published by the journal declined to include one in their correction. However, group A also noted that they had exchanged email correspondence with group B, prior to the submission of the comment, about some of the matters subsequently included in the comment. Group A have been at pains to stress that their correction was not primarily prompted by the comment.

The journal has engaged with both parties to find a mutually agreed statement on the chain of events that contributed to the publication of the correction, with a view to republishing the correction to clarify both the scientific record and the sequence of events. This has resulted in a great deal of time and effort being expended on several draft statements prepared by the journal over the previous 14 months.

As the matter remains unresolved between the two groups, the journal’s team has elected to publish nothing at all. The groups have been informed of this, and that the journal remains amenable to publishing a statement if the two parties are able to agree a form of words between themselves.

Nevertheless, the publisher regularly reviews its working practices and editorial policies, and this case has contributed to a change of the policies enacted by the publisher to reduce the likelihood of similar sequences of events and outcomes in future. Taking our experience in this case into account and aiming to address potential future conflicts of interest in submitted comments, a new comment/reply policy has been adopted. In hindsight, the previous comment/reply policy was problematic for a number of reasons, including the potential conflict of interest in having the author of the original paper being involved in the peer review of the submitted comment.

Question(s) for the COPE Forum
• Given the apparent impossibility of the two parties agreeing a form of words, and the threats of legal action and publishing their own version elsewhere, is the journal justified in choosing NOT to publish anything? Would it be better to publish the journal’s view anyway and accept the potential risks?
• While recognising the publisher’s original comment/reply policy contributed to this matter, does the Forum have any advice on how the publisher/journal could or should handle similar disputes in future? The policy has been amended to reduce the possibility of conflicts of interest.
• How far should the publisher go in trying to resolve disputes between groups (especially where, as in this case, only one party has actually published in the journal)?

The Forum agreed with the way the journal had handled this difficult situation, and that the editors had done a good job here.

One suggestion was that when the journal changed its policy, it may have been a good idea to explain why, in an editorial, which could have included anonymised details from the case and the reasons for the change in policy.

Another suggestion was that the journal could have been more transparent upfront when rejecting the comment. They may have been able to head off the dispute if they had informed the authors their reasons for doing so and explained what the journal then intended to do.

No subsequent correspondence from the affected parties has been received. The editor considers the case closed.

COPE's flowchart on what to do if you suspect peer review manipulation discovered either during or after the peer review process. 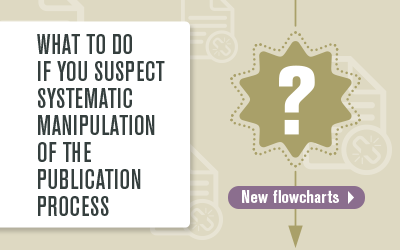 Reviewer requesting addition of multiple citations of their own work

A handling editor noticed a reviewer report where the reviewer instructed the author to cite multiple publications by the same reviewer in their manuscript. The handling editor noted a similar instance involving this reviewer from the past and requested the editorial office to look into his reviewing history. This uncovered a concerning pattern of behaviour where the reviewer habitually asked authors to add citations to his work when reviewing their manuscript, often when there was no scientifically legitimate reason to do so.

A deeper analysis of this reviewer’s activity showed that he predominantly asked for his own papers to be cited, as well as citations to papers that heavily cited his work. In some cases, he requested for more than 30 citations of his own papers to be added to a single manuscript. His citation requests were heavily weighted towards recent publications, giving preference to citations within a particular timeframe.

According to COPE’s ethical guidelines, reviewers should “refrain from suggesting that authors include citations to your (or an associate’s) work merely to increase citation counts or to enhance the visibility of your or your associate’s work; suggestions must be based on valid academic or technological reasons”.

In response to this case, the journal has banned this individual from reviewing for the journal. We are writing an editorial to clarify the journal’s official position on when reviewer requested citations are appropriate and to offer some suggestions to help others detect this behaviour. Editorial staff have convened a meeting with all the journal’s handling editors to ensure they are all familiar with COPE and the journals ethical standards, and to ensure they are looking out for cases of citation manipulation. Instructions to reviewers have also been updated to make it clear that there must always be a scientifically legitimate reason to suggest the author add citations to existing scholarship.

Question(s) for the COPE Forum
• What does COPE recommend to the journal editorial team in this case where the reviewer does not have an institutional body to turn to in order to continue the investigation?
• What else can the journal do to ensure that other journals working with this reviewer are aware of his evident citation manipulation?
• Should the journal also ban this individual as an author, both out of concern for his potential for future ethical problems, but also as a deterrent for those who might behave similarly?
• What, if anything, should the journal have done differently? Are there other actions the journal can take?
• Do other journals have safeguards in place that would help identify a pattern such as this one more easily?

The editor told the Forum that the journal has since discovered similar activity by the reviewer at other journals. COPE has guidelines on what to do if an editor wishes to share information with other editors (see Sharing of Information Among Editors-in-Chief Regarding Possible Misconduct).

Editors can share these data with Web of Science/Clarivate who work on algorithms at the journal level and for groups of journals regarding citation stacking. However, there are currently no tools available to detect this type of citation manipulation and hence no effective measures against it.

The usual advice in such situations would be for the editor to contact the reviewer’s institution. As the reviewer is self-employed, this is not possible in this case. The editor told the Forum that they had contacted the author’s one academic affiliation, with no response.

The authors of these papers must have accepted the insertion of so many citations—are they also complicit/being incentivised somehow to include? Authors should push back when asked to include extra citations.

Manipulation of the publication process is a relatively new form of misconduct affecting the publishing industry.

These guidelines represent an important first step towards encouraging openness and collaboration between publishers to address this phenomenon.

Systematic manipulation of the publication process is where an individual or a group of individuals have repeatedly used dishonest or fraudulent practices to:

This month’s topic is “journal management” and on first blush, it isn’t obvious how the concept of “ethics” applies to this topic. I thought of things like selection and implementation of a manuscript manager, paying bills, identifying reviewers, etc. But when I got past my concrete thinking it’s clear journals must be managed based on fundamental ethical principles. These include: Autonomy, Justice, beneficence, non-malfeasance.