On the last day of the World Conference on Research Integrity in Hong Kong in June, the afternoon plenary session chaired by Susan Zimmerman of the Secretariat on Responsible Conduct of Research in Canada explored predatory publishing, building on a summit in Ottawa two months earlier. Speaking were Deborah Poff, the COPE chair, Bhushan Patwardhan, vice-chair of the University Grants Commission in India, and myself, Matt Hodgkinson, Head of Research Integrity at Hindawi. 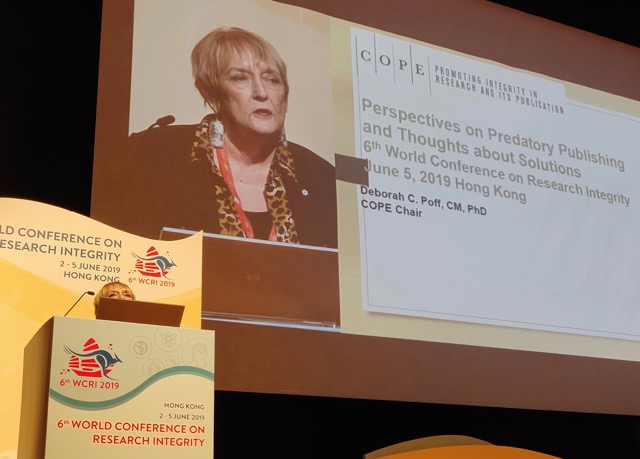 Deborah kicked off with a preview of COPE’s discussion document on predatory publishing, currently in preparation. She gave a philosophical whistle-stop tour of the complexities in defining and naming the problem. There is disagreement on what is sufficient to deserve the “predatory” label and the term may be a misnomer when authors know a journal is not reputable, but often we see that a publisher quacks like a duck and Jeffrey Beall’s coining has stuck. Essentially, predatory publishers are “flim flam men” who deceive, cheat, and squeeze money out of authors, such as by refusing all fee waivers and declining to withdraw submissions. They lack transparency and are given away by tells such as false claims of indexing, not declaring ethics and COIs, and poor language and production quality – though the latter is not a defining characteristic. They mimic real journals, even stealing titles or posing as them. The ill effects are wide ranging - they trick academics and institutions out of payments, harm careers, refuse to retract, tarnish legitimate Open Access, pollute the literature, and reduce trust in scholarship. Those who publish in these journals are mainly but not exclusively from Asia and Africa – thousands of North American and European researchers also publish with them – driven by pressures to publish and the difficulty of publishing in English for those who this is not their first language. From a business ethics perspective, we can take a two-pronged approach: caveat emptor (buyer beware) and the law. Education such as by Think. Check. Submit is useful, but predatory publishing can be seen as criminal and the US Federal Trade Commission successfully sued OMICS, resulting in a $50 million fine. See Deborah's presentation 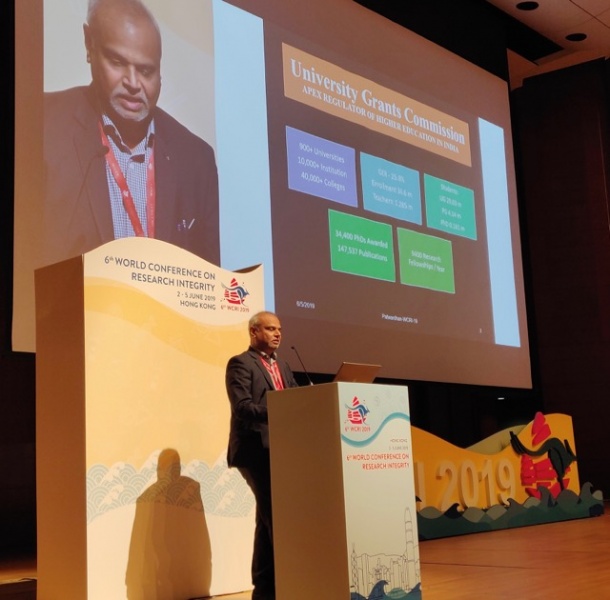 Bhushan described the UGC’s difficulties with tackling researchers at their over-900 universities getting involved with predatory publishers and avoiding their 160,000 PhD students from being tempted to ‘outsource’ their thesis writing. The UGC had a previous list of journals that excluded some well-known legitimate journals and included some widely-regarded as predators, based on faculty recommendations. They have a new approach with the just-founded Consortium for Academic and Research Ethics (CARE), which will define acceptable publication venues across STEM and H&SS: those in Web of Science or Scopus, a curated set of journals from the previous list, and new journals vetted by CARE. Fake impact factors, promising publication in a few days, and boards that do not reflect the journal scope are common problems they see in publishers. They are not giving all the details of their process to avoid gaming, and they have already had to deal with their website being cloned!

I looked at the timeline of predatory publishing over the past decade and how reputable Open Access publishers and organisations like COPE have reacted to this challenge, including in founding the Open Access Scholarly Publishers Association (OASPA) and setting and following the Principles of Best Practice and Transparency (https://publicationethics.org/resources/guidelines-new/principles-transparency-and-best-practice-scholarly-publishing). Predators harm legitimate publishers by confusing authors, winning the race when authors illegitimately submit to two journals (as they do no peer review), and degrading standards by lowering author expectations of peer review and increasing their expectations of speed, among other concerns. Predatory publishing is part of a wider ecosystem of ‘cargo cults’, which includes paper mills, fake peer review, scamferences – and even, briefly, a fake COPE. I outlined some alternative publishing models, including open peer review and preprints, and underlined how traditional subscription publishing is not immune to scams and poor practice – for example, the biggest bulk retraction ever was of thousands of subscription conference articles, many subscription journals also charge authors fees, and hijacked journals can present as subscription journals.

Tweets about the session can be seen at