Reflections on the COPE North American Seminar: Issues of inclusivity and diversity in scholarly publishing in the arts, humanities, and social sciences.

COPE’s first seminar of the year was held on Friday 3 May 2019 in Philadelphia. The theme for the event was issues of inclusivity and diversity in scholarly publishing in the arts, humanities, and social sciences (AHSS). Two panel sessions covered 1) an overview of the issues involved in inclusivity and diversity and 2) the challenges and suggested solutions for scholarly communications with 6 speakers and a lot of time for discussion and audience participation. Following lunch, the participants participated in an interactive workshop discussing up to 6 challenging cases of misconduct or questionable practices that have come to the COPE Forum. There were many highlights for me from this day, but here are a few of my Aha moments and insights (see the agenda for the day here). 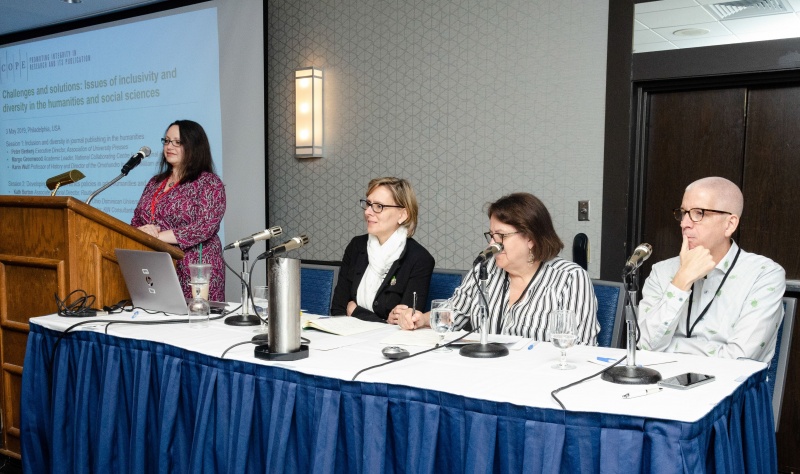 Karin Wulf, Professor of History and well-known “Chef” in the Scholarly Kitchen introduced us to the terms “manels” and “whanels” (all male panels and all white panels) and provided some suggestions to help identify a more diverse group of experts from which to draw authors, reviewers, editorial board members, commentators, and consultants. Karin is a co-founder of the group “Women Also Know History”, which is a media and curriculum tool to support and promote the work of more than 3,300 women scholars of history in all specialties. It was modeled after a similar group for political scientists "Women Also Know Stuff", and there seemed to be at least some interest among attendees in starting similar groups for other AHSS disciplines.

Margo Greenwood, Academic Leader of the National Collaborating Centre for Aboriginal Health in Canada, began her talk by identifying herself as a Cree woman and scholar and by acknowledging and honoring the First Peoples to inhabit the conference location (Philadelphia), the Lenni-Lenape. The tradition of Land Acknowledgement to open an event is a powerful way to show respect for indigenous people’s history and ways of knowing, as well as a way to raise awareness of a history of place. Margo’s powerful presentation spoke to the need to better understand and include indigenous ways of knowing science and technology and honoring and respecting a history of place.

Peter Berkery, Executive Director of the Association of University Presses, spent time discussing recent research on diversity and inclusion in publishing (for example The Diversity Baseline Survey) and making suggestions for improving workplace equity. The University Press Diversity Fellowship Program was recently awarded $1.2 million to offer apprenticeships with the goal of creating more inclusive programs and conferences and supporting the Diversity and Inclusion Task Force. A memorable statement from Peter reminds us that diversity and inclusivity are leadership issues and leaders must make time to do what it takes to improve the situation. It’s not acceptable to say it’s too difficult to find a more diverse pool of reviewers, to include a broader community of scholars in a publishing program, or to start a meeting with a Land Acknowledgement. Responsible leaders must make the time. 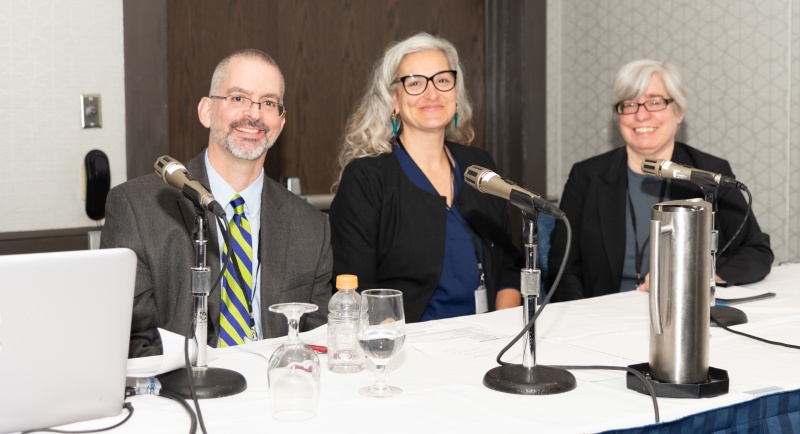 Kath Burton, Associate Editorial Director at Routledge, Taylor & Francis Group, presented preliminary findings from the survey of editors of AHSS editors, jointly sponsored with COPE. The top 5 concerns of the 650 respondents were: lack of inclusive language (64%); plagiarism (58%); bias in comments by reviewers (55%); inappropriate responses by authors to criticism (54%); and self-plagiarism or text recycling (50%). Concerns about the future included language and writing skills, data issues, and artificial intelligence creating machine-authored manuscripts. More results will be available in a white paper to follow.

Michael V. Dougherty, Professor of Philosophy at Ohio Dominican University, also presented his research on authorship violations in philosophy. Some of the most interesting findings included a new type of “compression plagiarism” that is unique to AHSS where many scholarly works are released in book or monograph format. It is possible but very time consuming to identify short papers that compress the ideas and the language of a book, which he has done and notified journal editors of the misconduct; however, ideas and the way in which they are expressed are the scholarly products in disciplines such as philosophy. Some authors use pseudonyms to write articles or commentary that promote one’s previously published work, making the work seem more important and enhancing citations. Pseudonyms are also used by some to protect their identities when they write about unpopular or controversial ideas, and, to hide the identity of hoax authors. Many of these cases are discovered by whistleblowers, who are not “professional avengers” and who do not know how to proceed in notifying journals and publishers.

Rebecca Kennison, Principal and Executive Director, K|N Consultants, presented a summary of the diversity and inclusion research in philosophy journals to conclude the panel. The white paper of these findings is available for public comment to encourage conversations on publication ethics in the humanities. The results summarize existing policies and statements on publication ethics in 265 journals in philosophy as well as input from journal editors, leadership of the American Philosophical Association, publishers, and representatives from COPE. Although there are recommendations resulting from the research, there is no intent to impose strict rules and regulations for philosophy journals around issues of publication ethics.

The slides from the presenters will be available on the COPE website. We know that the success of this seminar is due to the excellent presentations from our speakers, but the discussion and comments from our engaged audience speaks to the importance of publication ethics among all who are engaged in scholarly publications. We look forward to continued dialogue with all publishing and research communities in the years ahead.